Exploring the Gunflint Trail: “End of the Trail”

Exploring the Gunflint Trail: “End of the Trail” 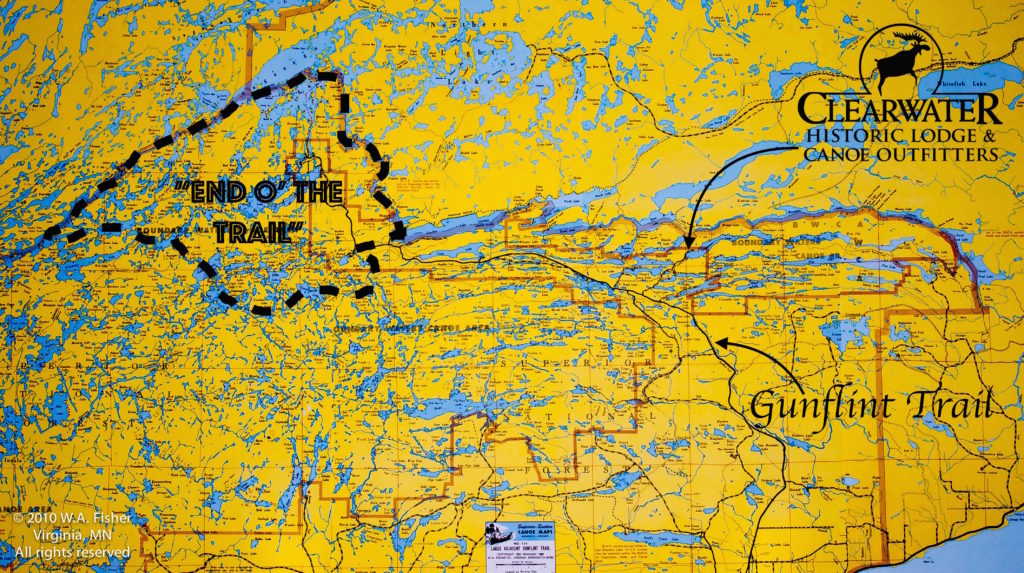 The Boundary Waters Canoe Area Wilderness is over 1 million acres of untrammeled woods and water stretching across three large counties in Minnesota from Lake Vermillion on the west side to almost the tip of the arrowhead on the east side.  The area it covers is roughly 110 miles from west to east and 40 miles from north to south, though it is not a perfect rectangle by any means you get the idea.  This large expanse from west to east leads to some differences between the specific regions, and though changes aren’t huge from one region to another if you know what some of them are it may help you decide on where to start your next trip from.

Typically, any discussion about where to enter the wilderness on your Boundary Waters canoe trip starts with deciding to go in through Ely on the west side or Grand Marais and the Gunflint Trail on the east side.  Though breaking the BWCA into west and east makes sense we feel there are enough differences within the eastern or western halves to further describe some of the “sub-regions”.

Considering our location and familiarity with the eastern half of the BWCA we will be starting by breaking down some of the differences between the sub-regions in that area first; as we see them.

From the 56-mile scenic byway known as the Gunflint Trail one can access 19 different Boundary Waters paddling entry points and we will start at the “end of the trail” and work down.

“End of the Trail”

Things to Consider:  Watch the Wind – Recent Wild Fires in the Area – Motorboats on Saganaga and Parts of Seagull Lake

At some point during your trip to the lakes at the end of the trail you will encounter prominent signs of past wildfires, this will most likely happen at your entry point.  This area has been affected by multiple fires over the past 20 years with the most recent and extensive one being the Ham Lake Fire in 2007, with Alpine, Red Rock and Sea Gull Lakes being the most noticeable.  Over the course of these wildfires the efforts to maintain the integrity of the designated campsites has kept most of them in their original form.  You will find most of the campsites in this area as they were before the fires, but surrounded by younger growth trees.  Don’t let the remnants of old fires scare you off though as the lakes at the end of the trail offer some of the best fishing in the state and the vast majority of the islands and their excellent campsites on Saganaga were unaffected and still hold some of the oldest trees in the state.  It has been ten years since the last fire and the area is greener than ever and though it may not be the picture perfect BWCA experience you have in mind it is a natural part of the evolution of the forest and an interesting look at how it is continuously changing.  Old burn areas are the best place to look for blueberries and spy a moose.  Regardless of the look entry points 54 and 55 will allow you to access the historic border waters that were paddled by the French Voyageurs, the excellent fishing on the South Arm of Knife Lake and Quetico Provincial Park.  The large quota of permits for both of these entry points means you can almost guarantee one will be available, even on short notice. 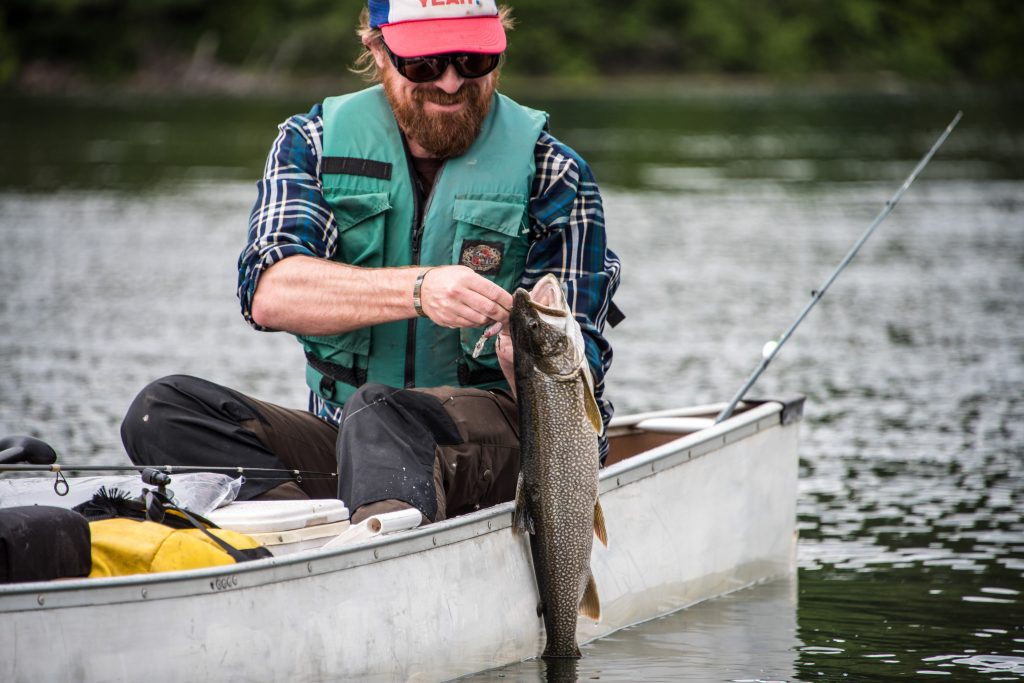 Saganaga and Sea Gull Lakes are well known for their world class fisheries (the state record walleye is out of Gull lake) and a trip to the end of the trail with a basecamp on either of these lakes would make for a perfect BWCA trip if fishing is your top priority.  If you’re not base camping, entering at Saganaga (#55) or Seagull (#54) is the best place to start a big loop style trip out to the South Arm of Knife or beyond.  Even if you’re not going to be spending the night in the park Trails End Campground is an excellent place to car camp and take day trips from.

Down the trail a bit from Trails End Campground you will find Round Lake Road which has three entry points off of it Cross Bay Lake (#50) Missing Link Lake (#51) and Brant Lake (#52).  The Brant Lake entry point requires the most paddling to get out of the old burn areas, with Missing Link and Cross Bay having little to no evidence of past wildfires, although you will paddle right past the campsite where the Ham Lake fire originated through the Cross Bay entry point.  The lakes west and south of Round Lake Road are going to be smaller and more numerous than the lakes around Trails End Campground, but then again just about every lake is smaller than Saganaga.  With the exception of the 435-rod doozy of a portage from Missing Link to Tuscarora you will find shorter portages and much more moving water between the lakes than anywhere else on the Gunflint Trail.  There are two proper river routes within the BWCA on the Gunflint Trail, the Granite River and the Frost River and the Cross Bay Lake entry point is the best one to use for the Frost River.  You could use Missing Lake as your jumping off point but the river flows in a clockwise direction so you can take advantage of that a little bit more by starting on the east side and working back around to the west and ending at Round Lake with a short walk back down to your vehicle at the Cross Bay parking lot.  The Cross Bay entry point is the most popular of the three so consider reserving one as early as possible, but for whatever reason there are almost always permits available to enter at Brant Lake.  If your visiting the BWCA specifically for the wildlife look no further than the Frost River.  Whether it swims, stands or flies the incredible amount of wildlife that calls the Frost River and surrounding areas home is second to none. The time of year and current water conditions do affect some of the paddling and portaging in the area (especially the Frost River) more so than others so it is advisable to check with a local outfitter on conditions before heading out.  Whether it’s a point A to B, loop or basecamp style trip you have in mind the different route options within this area are almost endless. 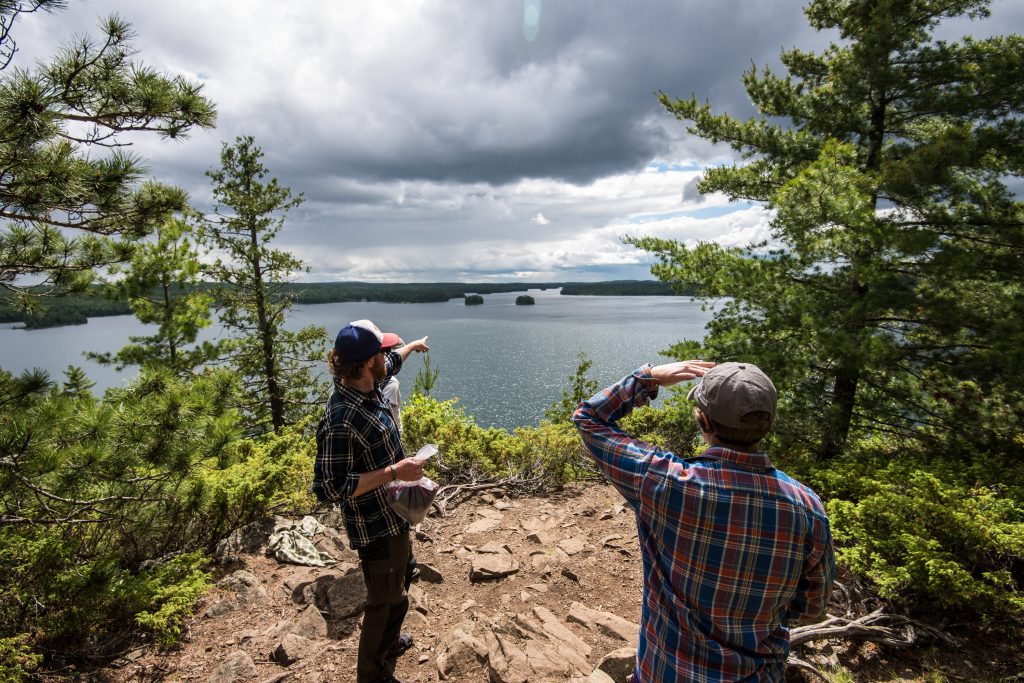 Between Gunflint and Saganaga Lakes you will find the Granite River route which is one of only two true river based paddles on the Gunflint Trail.  What makes it even more unique is that it is a larger river than the Frost and can be paddled almost throughout the year.  Don’t get too excited about this being some kind of a lazy river that you get to float down with coolers of beer tied to your canoe experience though, because it most definitely is not.  In fact, there are only a few spots on the entire stretch that you get to take advantage of current and the second half of the route is mostly lake paddling.  You will feel the current much more on the first half of the trip with some spectacular portages around waterfalls and rapids. This route is above the Laurentian Divide which means all of the water flows north to Hudson Bay which is a direction most people are not used to seeing a river flow.  Though you could paddle this in either direction but it will be much easier to go with the flow so entry point #57 and putting in at Gunflint Lake will be the best place to start.  If you wanted to go rogue and paddle up stream you would want to use entry point #55 Saganaga Lake.  Unfortunately, this is another area that was hit hard by the Ham Lake fire in 2007 and the results are still very evident throughout the entire route.  As with almost all of the other lakes affected by that fire almost all of the campsites were preserved during the fire. If you are looking to add on even more of a river experience to your Granite River trip or if there are no permits available, consider using entry point #80 Larch Creek. 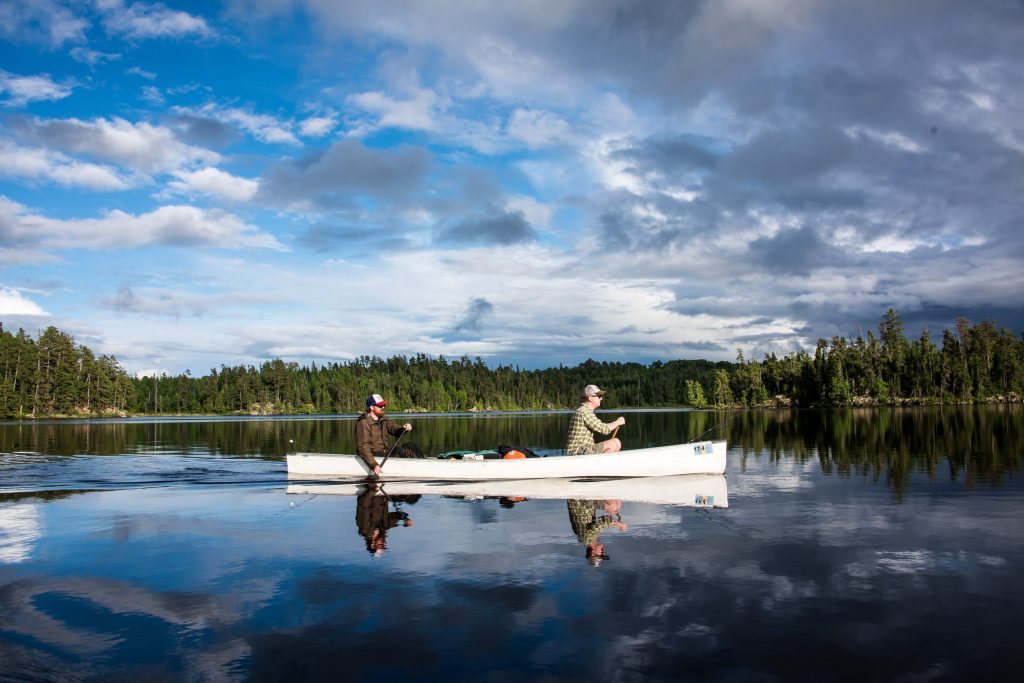 Tumblehome: A Boundary Waters Podcast It's a lake review episode[...] 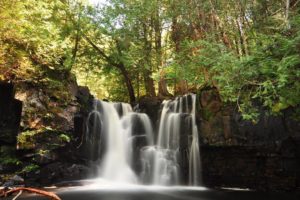 On the Trail to Johnson Falls

A stay on the Gunflint Trail is almost incomplete without[...]

Tumblehome: A Boundary Waters Podcast – 011: The Campsite on Little Caribou

It's just Erik on this episode talking about the ever[...]