In knowing that I am a paddler at heart, the idea of solo hiking was always an afterthought. After three years of working at Clearwater Lodge in the summer, I had never been on a solo hiking adventure.  That in itself speaks to the almost endless amount of outdoor activities one can engage in while working on The Gunflint Trail.  With the one day off I had last week I figured now was my chance.  The Caribou Rock Trail-Border Route Trail loop back to Clearwater Lake has always been in the back of my mind.  Not being entirely certain of my hiking skills and speed I figured I would give myself ample time for completion of the loop, and set the alarm for 5:30.  It has been a while since I have awoken before the alarm in anticipation for the day’s events.

Apparently the thought of hiking a new trail, alone, was enough, as I flicked the alarm off at 5:20. After preparing my day pack I was off, arriving at the empty trail head parking lot 15 minutes later. Upon filling out the permit and lathering up with some bug juice, I was on the trail.  It climbs in elevation immediately, and after 5 minutes reached one of the first lookouts and was rewarded with a glorious tail end of the sunrise over West Bearskin Lake.  From there the trail meanders up and over hills until it crosses the portage from Duncan to West Bearskin.

The border route trail narrows quite a bit from there and quickly climbs to an even higher elevation with a magnificent view of Duncan Lake.  I knew at that point Rose Falls was only a couple miles away and was looking forward to some reprieve from the bugs on a high windy ridge.  Stopping in the woods was out of the question, considering the mosquitoes would have picked my bones clean in minutes.  Nobody wants to run in to a walking skeleton on the trail.  Finally I made it to Rose Falls after only losing the microscopic trail a couple of times.  As I made my way up to the highest lookout yet the sun was just coming over the tall ridge behind me, slowly lighting up Rose Lake and Canada as far as the eye could see, turning the forest that jungle green which only occurs in perfect light.  Two sunrises in one morning, I don’t think I could have timed it better if I tried.  Who needs coffee on a morning like this, I thought. After pictures and some good old deep thinking, I pressed on.  The trail headed east from there and deep into the woods away from Rose Lake.  As expected I ran into some blow down area on the way to “Long Portage” between Rose and Daniels Lake.  The fairly new growth was just as tall as I was and very over grown, which made navigating the foot wide trail very difficult.  Making things worse, the trail has not been completely cleared of downed trees in years; it was downright treacherous at times.  Halfway to the “Long Portage” I headed back North towards Rose again and started descending into older growth forest.  The forest seemed to get older with every footstep toward the lake, until I was in a grove of giant old growth pines and the trail was now a couple feet wide.  It is easy to get spooked while solo hiking on a lightly traveled trail when the forest seems to engulf you on all sides, so I welcomed the change of scenery to a more wide open area. Now at least I will see that Bobcat stalking me, I thought.  Solo hiking gives you a great opportunity to get lost in thought.  The old grove of trees got my mind off of that bobcat and on to the age of some of the old giants.  They were living well before I was and will still be well after I am gone.  It was a very humbling moment to say the least.

As I reached the shore of Rose I was snapped from my daydreaming by clouds of hungry, hummingbird size mosquitoes. Stopping for water was a death wish, it would have to be on the move.  The next two miles of trail follow the south shore of Rose Lake and I was able to take advantage of the wind that was picking up.  A campsite on the east end of the lake is intersected by the Border Route Trail I was currently on, and I was bit anxious about the idea of waltzing right through a strangers campsite at nine in the morning. As I approached I could hear voices, I had no choice but continue through the campsite. I was impressed at my “low impact, quiet as a church mouse”, approach to hiking as I was able to walk within 10 feet of the family enjoying breakfast before I felt the need to say hello in fear of scaring the father into his “fight” option and having him take a swing.  Luckily, the hello did not scare the family, or the free swinging father and I continued on my way.  Shortly after I met up with the portage to Daniels and started heading south. The portage was a nice change from constantly climbing up and over hills for the last eight miles. It was a two miles to Clearwater from there and the portage was flat and passed through another two campsites. The uneventful portage gave me time to prepare for another possible breach of privacy on the next campsite.  I could smell smoke and knew I was in for another set of awkward stares, and even more awkward conversation.  Again my quiet hiking allowed me to walk right into camp before offering a “good morning” to the four men sitting around the fire grate. We engaged in small talk, which when you don’t break stride and continue walking, consists of one question and one answer.  The border route trail was right on top of Daniels now and the wind was picking up enough that bugs were no longer an issue.  As the level trail wound along the shores of white-capped Daniels Lake, the wheels were churning in my head in preparation for the next camp site I would pass through.  I had a mile and I would be ready this time, ready to impress the potential campers.  After coming up with a few witty remarks and playing out every possible response and answer in my mind I was prepared for anything.  The trail came around the last corner and into the small bay where the campsite sat. Empty! I was oddly disappointed; all of my material would go to waste. From there it was a flat muddy trail for the next mile or so.

Stepping out on Clearwater Road I was immediately aware of my sore feet and was glad to be back. The short walk gave me a chance to realize how much I enjoyed my hike, and hiking in general.
It was a great change of pace from paddling and portaging gear.  Having the wind as a friendly mosquito banisher was a great change from having it as my arch nemesis when I’m on the water in a canoe.  I thoroughly enjoyed my time in the woods, being on land the whole time and seeing the area in an entirely different way, helped me to appreciate the forests up here in a whole new way.  For those interested, the entire border route trail was roughly 11 miles long and was completed in five hours.  So to anyone who hasn’t tried something new lately, give it a shot, you have no idea what you’re missing. 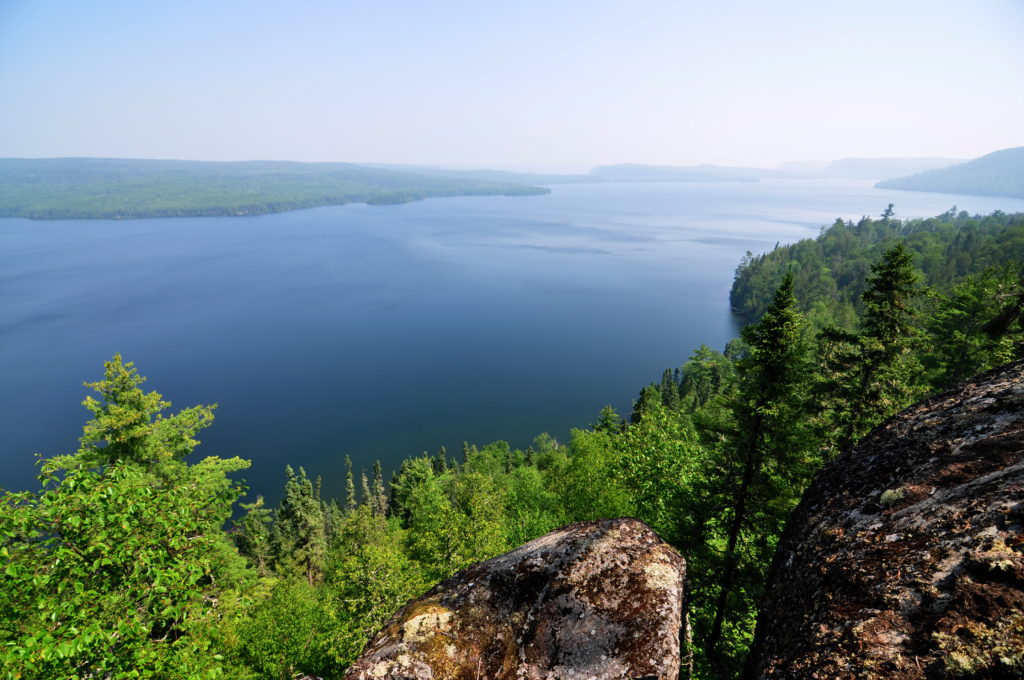 In todays show we talk about the one and only[...]

Wrapping up our discussion on getting lost in the wilderness;[...]